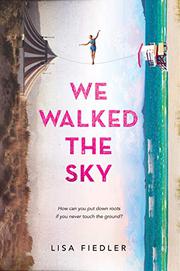 WE WALKED THE SKY

In a story told in two voices, several generations of women in VanDrexel’s Family Circus learn how and when to be solo acts—and when to trust the net.

When the circus comes to Brooksvale, Massachusetts, in the spring of 1965, a wealthy 16-year-old seizes the chance to escape her abusive father. Renaming herself Victoria, she joins the circus, planning to leave once she’s far enough away to build a stable, independent life for herself. She doesn’t plan to become a tightrope walker, and she certainly doesn’t plan to fall in love….Half a century later, 16-year-old high-wire star Callie and her mother, Quinn, leave the circus after Callie’s secretive grandmother Victoria dies. Quinn’s new job at an animal sanctuary in Florida puts Callie’s career on hold, and she reluctantly enrolls at the local high school. Against Victoria’s captivating and emotional narrative, Callie’s resistance to a settled life reads as less sympathetic and her conflict as lower stakes, even after the discovery of an old box of keepsakes from Victoria’s transformative and tragic young adulthood changes Callie’s life. Victoria, Callie, Quinn, and those closest to them are assumed white; nonwhite characters are extremely marginal. While Victoria briefly mentions the “ugly din” of “riots” in Harlem and Birmingham, specific social and political movements go unaddressed; Callie’s voice is similarly disconnected from current events.

A compelling story of identity and family that resonates most powerfully in its historical voice.