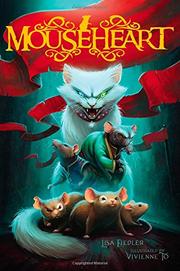 From the Mouseheart Trilogy series, volume 1

A naïve mouse discovers his true mettle when he’s accidentally plunged into a world of warring rats, mice and feral cats in Brooklyn’s underground transit tunnels.

An avowed coward, Hopper lives in a pet-shop cage with his sister and brother. After a dramatic escape, Hopper’s separated from his siblings and finds himself alone and terrified in dark tunnels, from which a wily rat named Zucker rescues him. Sympathetic and engaging, Zucker takes Hopper to the sprawling rat metropolis of Atlantia, where Zucker’s father, Titus, rules. Treated like royalty and initially impressed, Hopper gradually discovers that Atlantia hides dark secrets. When he’s captured by a band of rebel rats who deliver him to a tribe of mice called the Mus, Hopper learns he may be the son of Mus’ legendary leader and could indeed be their Chosen One, destined to lead them against their archenemy, Titus. Unsure if he should trust his friend Zucker or the Mus, a confused Hopper resolutely overcomes his fear to discover the real meaning of courage. Riddled with surprises, the fast-paced, complex plot features a host of vivid, memorable rodent and feline characters. Black-and-white illustrations capture key events.

Another stalwart mouse with a brave heart will win fans in this captivating underground adventure.