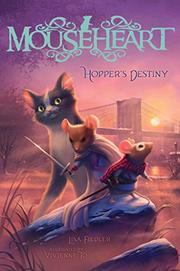 From the Mouseheart Trilogy series, volume 2

In this sequel to Mouseheart (2014), warrior mouse Hopper finds himself on the streets of Brooklyn, where he discovers new allies for his efforts to bring peace to the rodents of the subway tunnels.

Although he’s the Chosen One of the Mus, Hopper believes his destiny lies with the rat colony, Atlantia, and Prince Zucker. Following a battle to depose the despot Titus, Atlantia’s a ruined city. To protect its starving citizens from feral cat attacks while the city’s being rebuilt, Hopper hopes the Mus colony, ruled by his bellicose sister Pinkie, will offer temporary sanctuary. When Pinkie refuses to cooperate, Atlantia’s attacked by human exterminators. With Zucker presumed dead, Hopper’s accidentally carried aboveground and rescued by a likable cat named Ace, who eventually convinces him to return to Atlantia and find his younger brother Pup. Joined by feisty new friends, Hopper finds rats rebuilding Atlantia and launches an attack on the feral cats. Unexpectedly reunited with a stranger from their past, Hopper and Pinkie prepare to confront the now-embittered, estranged Pup. Harrowing plot twists, moral dilemmas and colorful animal characters make this second volume as supercharged and thought-provoking as the first. Atmospheric illustrations add drama.