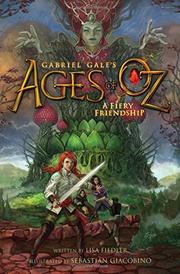 From the Gabriel Gale's Ages of Oz series, volume 1

Dorothy wasn’t the first young girl to take an epic journey down the Yellow Brick Road.

Long before becoming the Good Witch of the South, Glinda Gavaria was a wide-eyed, red-haired white teenager from Quadling Country whose biggest worry was what career she would be forced to accept. Poised to follow in her mother’s footsteps as a seamstress, Glinda quickly learns that life in Oz is nothing like what it seems. Her mother, a seemingly benign seamstress, is actually a powerful sorceress whose revolutionary faction is trying to restore Princess Ozma to the throne, stolen from her while fighting against the four wicked witches who have a stranglehold on the four Oz kingdoms. In Fiedler’s dystopian reimagining of the Oz mythos, the country is suppressed by four wicked witches who forbid the use of magic while subjugating the citizens to the rule of a secret evil sorceress to whom the witches owe their allegiance. While this novel stands alone on its own merits, readers familiar with Baum’s original series will enjoy spending time with famous characters such as the malevolent Mombi and Nick Chopper midway through his transformation into the Tin Woodsman. The author crafts an intricate world filled with excitement and magical creatures, but unfortunately Glinda’s character does not fully crystallize before she is swept up in her adventure.