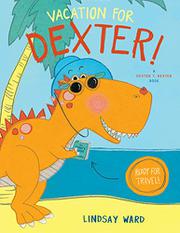 From the Dexter T. Rexter series

Jack and his over-the-top, animate, orange T. Rex toy are back, this time tackling their fears of flying.

Jack and Dexter are very excited for vacation—they are going “someplace exotic called FLOR-I-DA.” But when the car stops too soon and Dexter realizes they are at the airport, even his vacation accessories can’t keep him from losing his cool; everyone knows T. Rex arms are too short for flying. But just as Dexter really starts to melt down, he gets a glimpse of Jack and realizes he needs to take care of his boy. Dexter pulls out all the stops in calming Jack, and the duo sing their song (with an airplane twist), peer out the window, and enjoy the movie and all the cookies the “nice lady” plies them with. Ward’s orange dino continues to break the fourth wall, though he’s a mite calmer than usual in this outing. The illustrations are just as laugh-out-loud funny as ever, with the toy’s expressions stealing every scene. Jack, who has brown skin, sits in a window seat next to a girl/woman who shares his coloring; across the aisle are a man and a woman with a baby who also all have brown skin. The relationships are not clear, though the text states Jack is not sitting with his parents.

Jack and Dexter have become a beloved duo, and the dino’s behavior-modeling sure goes down easily.