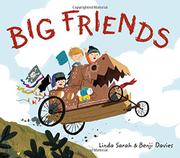 For those few blighted souls out there who are unaware of this fact, cardboard boxes are a kid’s answer to pretty much everything.

Birt and Etho are a couple of mites with a couple of nice-sized boxes that can launch friendships—and lots of other ships: pirate, flagships, and submarines. Each day they drag the boxes up Sudden Hill and become kings, astronauts, naturalists watching the world go by, ant by ant. Sarah is not goopy with the language, though its pleasing atmosphere can get somewhat filigreed: “Birt loves their two-by-two rhythm.” As will happen, “one Monday morning (it’s cramping cold) they meet another box-carrier.” Etho is ready for a comrade, Birt not so. Indeed, Birt retreats home one night and jumps on his box until it’s flat as an album cover. Birt ignores Shu and Etho’s entreaties to come and play, until...they arrive with a box contraption built for three. It’s a crazy Rube Goldberg device, clattering, careening, crashing: it’s Mr. ClimbFierce or sometimes a Monster-Creature-Box Thing. Of course it is. Birt “loves their three-by-three rhythm. / It’s new. And it’s good.” Davies’ alluring rustic-looking artwork with just the right slants of light salve this story considerably.

Excellent, believable advice, with boxes—what could be better than that? (Picture book. 4-8)