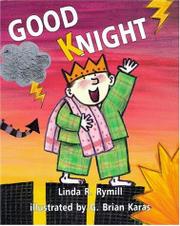 Rymill captures a nearly universal domestic ritual in her picture-book debut: the nightly struggle to get a reluctant child into bed. A young fire chief complains vociferously as he’s stripped of his gear and urged into the tub, protests again when he’s removed in the midst of a sea battle, dried (“No. Don’t get the pink towel. Admirals don’t USE pink.”), handed his pajamas (“But it’s not that time!”), and sent to his castle/bedroom. He tries to duck away from a kiss after he’s tucked in, but finally succumbs to the inevitable, asking for a bedtime story and telling his mother he loves her. The short, rhymed text appears in varied sizes and weights on Karas’s full-spread paintings; the child, with his stubby body stubbornly tilted against the visual flow, moves in and out of imaginary worlds that are depicted with dramatic colors and strong, jagged lines. (Picture book. 5-7)