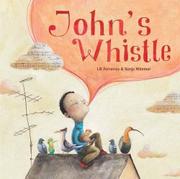 Although John communicates only by whistling, he finds acceptance at home, admiration and friendship at school, and true love.

That seems to be what this sweet story is about, although at the end, when he thinks he’s lost the girl who has caught his eye, he finds his voice—so perhaps it’s a story of late blooming rather than genuine acceptance of differences. Wimmer’s curving, elongated figures are accentuated by the design choice to make this nearly square book open vertically rather than horizontally, awkward to hold. This is another difference to accept. Collaged-in bits of musical scores weave among the figures, suggesting John’s thoughts; when he speaks, the notes appear in speech bubbles. The slightly surreal art complements this allegorical tale, a wordy picture book for older readers. There is one jarring note, perhaps introduced in the translation from Spanish. John’s friend Taleb, who communicates first through his art, because he doesn’t yet speak the language of the country, “stop[s] drawing immediately” when John is angry about their having feelings for the same girl, though they remain friends. But more than a new translation of the words will be necessary for this love story to find an American audience.