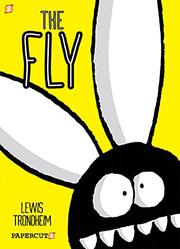 A French cartoonist chronicles ups and downs in the life of a fly with clown shoes.

The shoes are only the beginning, as the fly, hatching from a tiny egg (and skipping the larval stage) also sports outsized teeth and a fixed look of wide-eyed, goofy enthusiasm that makes its subsequent adventures all the more comical. In profuse arrays of small, wordless, cinematic panels, nine to a page and all in black and white, Trondheim zeroes in on a kitchen garbage can from which the eager insect, after a false start or two, buzzes off for encounters happy or otherwise with: a window, a decidedly unfriendly spider, a pepper shaker, a cat box, and other joys and hazards of the inside world. Events then take a surreal (not to say cosmic) turn, as the fly grows in spurts to monster size, terrifies a city, flits into intergalactic space—and suddenly finds itself back in the kitchen, fly-sized again and primed for further misadventures. If the last few pages hurtle past like sketchy afterthoughts, this introduction to an insect innocent—who has been entertaining audiences overseas and online since 1995 both in comics form and in a long series of short films—will beguile young readers on this side of the Atlantic as well.