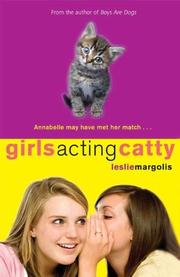 On the heels of Boys Are Dogs (2008), in which sixth grader Annabelle learned to control negative boy behavior with dog-training tips, comes this sequel, in which she discovers that girls can be very catty. Taylor and her entourage are a particular problem: They’re the “populars,” who all but terrorize the just-average girls who make up the majority of their junior high school. Inexplicably, given that Annabelle has come from an all-girls school, this cattiness is a new discovery for her, as she walks a fine line between earning Taylor’s ire and alienating her true friends. Secondary issues include her mom’s upcoming (and first) marriage and her future stepfather’s hunky son’s moving in, inspiring a serious crush. This average effort lacks the ironic humor of Annabelle’s first outing with its useful dog (boy) manual advice. Annabelle’s first-person voice rings true enough, but all others are stock characters, and the outcome is predictable. While an important topic, it has been covered innumerable times, and there’s no new insight here. Purchase if Annabelle’s first appearance was a hit. (Fiction. 9-13)