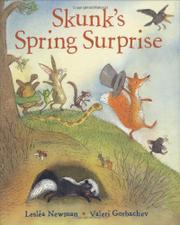 In this sequel to Where Is Bear? (2004), which ended with Bear’s hibernation, Skunk awakes from her own deep sleep and exclaims, “Hooray! My winter nap is done! / It’s time for me to have some fun.” She sets out to locate her animal friends, but finds the forest empty. During her search, Skunk also realizes that she is parched and heads for the lake. At the shore, she discovers her friends, who have planned a surprise talent show with dancing, juggling, acrobatics and more tricks. While Skunk ends the show with a poem she has written, Bear finally rises and joins in the spring-time festivities. The sing-song, rhyming text of this entry includes occasional humor, but is not as tight as in the first. But those cheery animals, rendered in pen and ink and watercolor, will be irresistible to the preschool set. (Picture book. 2-7)