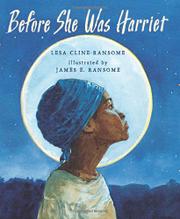 BEFORE SHE WAS HARRIET

A memorable, lyrical reverse-chronological walk through the life of an American icon.

In free verse, Cline-Ransome narrates the life of Harriet Tubman, starting and ending with a train ride Tubman takes as an old woman. “But before wrinkles formed / and her eyes failed,” Tubman could walk tirelessly under a starlit sky. Cline-Ransome then describes the array of roles Tubman played throughout her life, including suffragist, abolitionist, Union spy, and conductor on the Underground Railroad. By framing the story around a literal train ride, the Ransomes juxtapose the privilege of traveling by rail against Harriet’s earlier modes of travel, when she repeatedly ran for her life. Racism still abounds, however, for she rides in a segregated train. While the text introduces readers to the details of Tubman’s life, Ransome’s use of watercolor—such a striking departure from his oil illustrations in many of his other picture books—reveals Tubman’s humanity, determination, drive, and hope. Ransome’s lavishly detailed and expansive double-page spreads situate young readers in each time and place as the text takes them further into the past.

A picture book more than worthy of sharing the shelf with Alan Schroeder and Jerry Pinkney’s Minty (1996) and Carole Boston Weatherford and Kadir Nelson’s Moses (2006).