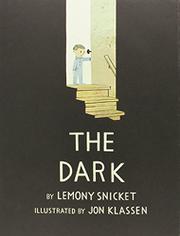 Are you afraid of the dark?

Laszlo is. The dark mostly keeps to the basement, but sometimes it hides in the closet or behind the shower curtain. Every morning Laszlo greets the dark when it is safely back in the basement, calling “Hi, dark,” down the staircase. He hopes that this acknowledgement will keep it from coming to him in the night, when a night light illuminates his bedroom as he goes to sleep. He keeps a flashlight at the ready on his pillow, just in case. And one night, the dark does come—presumably the night light has gone out. Laszlo answers the dark’s call to the basement, where he sees a small dresser. “Bottom drawer,” the dark says, and inside he finds light bulbs. The next scene shows his bedroom now illuminated by the returned soft glow of the night light, and Laszlo no longer fears the dark. Klassen’s artwork outshines the text, which, although poetic and begging to be read aloud, falters in its pacing and delivers an anticlimactic (if friendly) resolution to its initially creepy tone. The gouache-and-digital illustrations make the most of the references to light and dark, however, confining the palette to muted tones that contrast satisfyingly with the inky black. Laszlo, though a new creation for this story, somehow seems satisfyingly familiar.

A lovely if uneven offering about a common childhood fear.