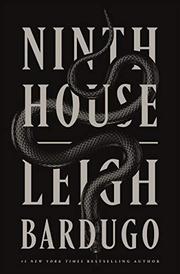 Most Yale students get admitted through some combination of impressive academics, athletics, extracurriculars, family connections, and donations, or perhaps bribing the right coach. Not Galaxy “Alex” Stern. The protagonist of Bardugo’s (King of Scars, 2019, etc.) first novel for adults, a high school dropout and low-level drug dealer, Alex got in because she can see dead people. A Yale dean who's a member of Lethe, one of the college’s famously mysterious secret societies, offers Alex a free ride if she will use her spook-spotting abilities to help Lethe with its mission: overseeing the other secret societies’ occult rituals. In Bardugo’s universe, the “Ancient Eight” secret societies (Lethe is the eponymous Ninth House) are not just old boys’ breeding grounds for the CIA, CEOs, Supreme Court justices, and so on, as they are in ours; they’re wielders of actual magic. Skull and Bones performs prognostications by borrowing patients from the local hospital, cutting them open, and examining their entrails. St. Elmo’s specializes in weather magic, useful for commodities traders; Aurelian, in unbreakable contracts; Manuscript goes in for glamours, or “illusions and lies,” helpful to politicians and movie stars alike. And all these rituals attract ghosts. It’s Alex’s job to keep the supernatural forces from embarrassing the magical elite by releasing chaos into the community (all while trying desperately to keep her grades up). “Dealing with ghosts was like riding the subway: Do not make eye contact. Do not smile. Do not engage. Otherwise, you never know what might follow you home.” A townie’s murder sets in motion a taut plot full of drug deals, drunken assaults, corruption, and cover-ups. Loyalties stretch and snap. Under it all runs the deep, dark river of ambition and anxiety that at once powers and undermines the Yale experience. Alex may have more reason than most to feel like an imposter, but anyone who’s spent time around the golden children of the Ivy League will likely recognize her self-doubt.

With an aura of both enchantment and authenticity, Bardugo’s compulsively readable novel leaves a portal ajar for equally dazzling sequels.