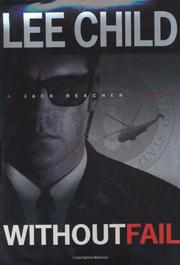 From the Jack Reacher series, volume 6

When the newly elected Vice President’s life is threatened, the Secret Service runs to nomadic soldier-of-fortune Jack Reacher (Echo Burning, 2001, etc.) in this razor-sharp update of The Day of the Jackal and In the Line of Fire that’s begging to be filmed.

Why Reacher? Because M.E. Froelich, head of the VP’s protection team, was once a colleague and lover of his late brother Joe, who’d impressed her with tales of Jack’s derring-do as an Army MP. Now Froelich and her Brooks Brothers–tailored boss Stuyvesant have been receiving a series of anonymous messages threatening the life of North Dakota Senator/Vice President–elect Brook Armstrong. Since the threats may be coming from within the Secret Service’s own ranks—if they aren’t, it’s hard to see how they’ve been getting delivered—they can’t afford an internal investigation. Hence the call to Reacher, who wastes no time in hooking up with his old friend Frances Neagley, another Army vet turned private eye, first to see whether he can figure out a way to assassinate Armstrong, then to head off whoever else is trying. It’s Reacher’s matter-of-fact gift to think of everything, from the most likely position a sniper would assume at Armstrong’s Thanksgiving visit to a homeless shelter to the telltale punctuation of one of the threats, and to pluck helpers from the tiny cast who can fill the remaining gaps because they aren’t idiots or stooges. And it’s Child’s gift to keep tightening the screws, even when nothing’s happening except the arrival of a series of unsigned letters, and to convey a sense of the blank impossibility of guarding any public figure from danger day after highly exposed day, and the dedication and heroism of the agents who take on this daunting job.

Relentlessly suspenseful and unexpectedly timely: just the thing for Dick Cheney’s bedside reading wherever he’s keeping himself these days.