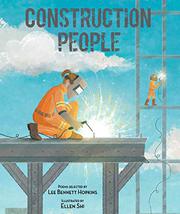 Fourteen poems capture a skyscraper’s construction, from beginning to completion, in vivid detail.

In the first verse, by Rebecca Kai Dotlich, the nascent high-rise, narrating from an empty lot, excitedly contemplates its future: the workers and materials its construction will entail and how it will eventually ascend to lofty heights; in the last, also by Dotlich, the finished structure proudly announces its presence on the “spectacular skyline.” The remaining robust poems, each by a different contributor and presented on double-page spreads, describe the various skilled jobs and professionals involved in a skyscraper’s planning and building and also—take note, vehicle mavens—the trucks required at a construction site. Apart from enjoying jaunty rhymes that scan well and include numerous delightful turns of phrase, readers gain insight into the many workers who collaborate on a new building’s successful, safe skyward climb. Additionally, children will build their vocabularies with nifty words like “glaziers” and “welders.” Onomatopoeia is used to good, dramatic effect where applicable. Lively, appealing artwork grounds this collection: Many of its action-filled illustrations also highlight verticals and horizontals. Women are well represented throughout as skilled, busy professionals in various nonstereotypical or supervisory positions. Workers are depicted with varied skin tones, hairstyles, and racial presentations, including the female Asian architect and her daughter, recurring characters. Endpapers are rich ocher, the color of soil.

A lovely foundation for forays into poetry and for building a love of buildings.