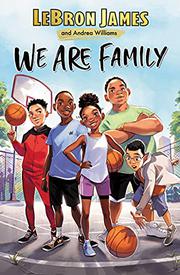 Basketball is life in Lorain, Ohio.

A group of seventh graders have different reasons for joining Hoop Group, an elite youth basketball program. Jayden, who lives in a tiny, cramped house with his mother and grandmother, desperately needs the money playing for the NBA would bring. Chris’ uncle made it out of Lorain and into the NBA, but he doesn’t share his uncle’s skills and can’t quite live up to his father’s expectations. Tamika’s dad was Hoop Group’s coach before Parkinson’s disease put the team’s future in jeopardy; she has a lot to prove and dreams of being the next Pat Summitt. Dex and his hardworking single mom are struggling with poverty, but he just loves the game––especially the Cleveland Cavs. And Anthony, frankly, doesn’t have much of a choice; it was either join this character-building group or face expulsion from school. A makeshift team of preteens with a lot on their plates, they discover as much about themselves (and one another) off the court as they do on it. The authors present a convincing argument about the value of basketball beyond points on the board and big contracts. The characters’ dreams are relatable along with the book’s universally valuable emphasis on hard work and perseverance. But the specifics about what it takes to make it in basketball and the fast-paced on-court action provide something special for young fans of the game. Main characters read as Black.

An inspiring sports story all the way to the buzzer.