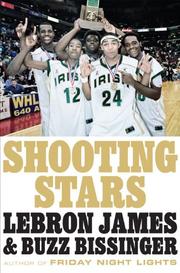 by LeBron James and Buzz Bissinger

Although Bissinger’s authorial stamp can be somewhat heavy at times, there’s still plenty of conversational snap in James’s modest but passionate first-person voice. The co-authors adequately humanize all five starting members of Ohio’s St.Vincent-St. Mary Shooting Stars. Of course James is the focus here, and he provides ample biographical details about his fatherless upbringing in the Akron housing projects. James proved to be not only a gifted athlete—effortlessly excelling in both football and basketball—but also an honor-roll student. His teammates were an eccentric mixed bag, but all hailed from economically underprivileged backgrounds and ended up on scholarship at the mostly white private high school. As a result, they were often considered traitors by the black community, while never feeling wholly accepted in white society. It was James’s remarkable individual play that eventually brought national attention to the team. During his senior season, he was on the cover of Sports Illustrated, and suddenly his team was pushed into the national spotlight—with all the attendant accolades, pressures and pitfalls. When James accepted $850 in merchandise from a local Cleveland clothing shop—in violation of an obscure and rarely enforced rule—he was temporarily suspended and then dragged into a court hearing. The inspirational heart of the book is James and his teammates’ gutsy performance in the face of the tornado-like media frenzy. The co-authors dramatically re-create the minute-by-minute highlights of key games in St.V’s national-championship drive, but they also interject some serious social commentary on the vindictiveness, greed and exploitation that can infect the seemingly pristine world of amateur sports.

A simple but moving story about the double-edged sword of precocious athletic talent and the redemptive power of teamwork.