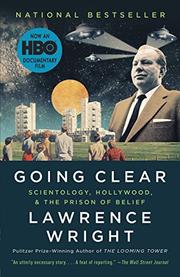 Scientology, Hollywood, and the Prison of Belief

A devastating history-cum-exposé of the Church of Scientology.

Wright has written about religion on several occasions (Saints and Sinners, 1993; Remembering Satan, 1994) and received a Pulitzer Prize for his book on terrorism (The Looming Tower: Al-Qaeda and the Road to 9/11, 2006)—all of which clearly served as excellent training for this book. It begins, of course, with the life of L. Ron Hubbard, a manic-depressive, wannabe naval hero, sci-fi writer and self-styled shaman who “believed that the secrets of existence were accidentally revealed to him” after receiving a gas anesthetic in the dentist’s chair. After that experience, the visions kept arriving, leading to his 1950 self-help best-seller, Dianetics, which laid the groundwork for a “religion” where “thetans” (souls) are stymied by “engrams,” self-destructive suggestive impulses lodged in the brain (not a few of which were inflicted on mankind following an intergalactic war that took place 75 million years ago). Through personal, deeply revelatory counseling sessions known as auditing, adherents deal with these obstacles, and for wealthy celebrities, Scientology (and its many Hollywood connections) has supposedly cleared the path to success. It has also destroyed many others, usually less well-heeled people from within, who raise questions or try to leave, or outside forces (journalists, the IRS, family members) investigating the church’s multiple personal or financial abuses. Wright exposes the church’s many sins: covert espionage, psychological torment, threatened blackmail using confidential information from auditing sessions and constant physical assaults on members by tyrannical current leader David Miscavage. The author is also interested in something deeper: If it's all a con, why is everyone involved (especially the late Hubbard) so deeply invested in its beliefs? Wright doesn't go out of his way to exaggerate the excesses of Scientology; each page delivers startling facts that need no elaboration.

A patient, wholly compelling investigation into a paranoid “religion” and the faithful held in its sweaty grip.