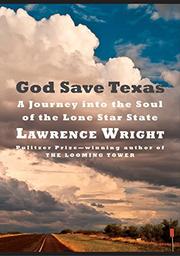 A Journey into the Soul of the Lone Star State

One of the state’s most renowned writers takes readers deep into the heart of Texas.

As a staffer for the New Yorker and a Pulitzer Prize–winning author, Wright (The Terror Years: From Al-Qaeda to the Islamic State, 2016, etc.) has illuminated a variety of intriguing subcultures. His native Texas is as exotic as any of them. He approaches his subject on a number of levels: as a stereotype, a movie myth, a cultural melting pot, a borderland, a harbinger of what is to come in an increasingly polarized and conservative country, and as a crucible that has shaped the character of a young writer who couldn’t wait to escape but was drawn back. “Some maybe cowardly instinct whispered to me that if I accepted the offer to live elsewhere, I would be someone other than myself,” he writes. “My life might have been larger, but it would have been counterfeit. I would not be home.” The Austin-based author makes himself at home in these pages, traveling through Austin, Dallas, Houston, and El Paso and exploring the desolate wonders of Big Bend, “one of the least-visited national parks in the country, and also one of the most glorious,” and the West Texas wonders of Marfa, Lubbock, and Wink. The chapter on the levels of Texas culture, an updated version of a Texas Monthly piece from 1993, is particularly incisive. But the misadventures of the Texas legislature are what will strike most readers with an uneasy mixture of amazement, amusement, and disbelief; one law, notes the author, allows citizens to “openly carry swords, a welcome development for the samurai in our midst.” Once a Democratic bulwark (albeit conservatively so), the state has since become even more conservatively Republican, though a population that is not only growing, but growing younger and more diverse—the “Anglo” majority has become the minority—could make the state very much in play.

A revelation—Wright finds the reflection of his own conflicted soul in the native state he loves and has hated.