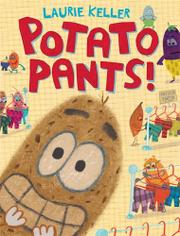 Nightshades clash more than just their personalities in this high-energy picture book.

A potato is very excited about getting a pair of potato pants. He rushes to Lance Vance’s Fancy Pants store, along with a horde of other tubers, googly eyes, smiles, and teeth drawn haphazardly onto collaged-in photographs and drawings. But one giant eggplant is also in the pants store, trying on a loud yellow garment patterned with pineapples. At first the potato argues that “Eggplants don’t even wear pants!” (perhaps that would be too ridiculous). It turns out that “Yesterday was Eggplant Pants Day,” but the potato is still suspicious; “Yesterday,” he says, “I was walking along, minding my own potato-y business…when he ran by and PUSHED ME right into a trash can!” Not wanting to patronize the same establishment, the potato lurks outside the store, even calling a grocery store in the hopes they might sell tater togs (or even a pair of “cucumber cords”), to no avail. Finally he bursts into the store, sending the eggplant flying, only to find that another root has snatched up the last pair of pants. Two apologies and one pair of display pants later, the conflict is all patched up, and the two friends dance the Robot. Zany and meandering, this story will make kids laugh despite the uneven pacing and maybe even model the art of apology.

A high-energy read with plenty of kid appeal.