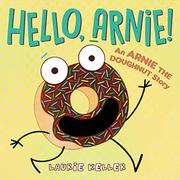 From the Adventures of Arnie the Doughnut series

A new arrival forces Arnie the doughnut to think outside the pastry rack.

Kicking off another exciting day at the bakery, Arnie exuberantly greets every other mouthwatering treat by name—“Hi, Plain! Hey, Long John! Top of the morning, Jelly!”—until he breaks the fourth wall by looking up from the page: “AHHHH!!! You’re…the biggest doughnut…I’ve ever seen!” But what kind of doughnut? Arnie goes about methodically gathering clues: “1. You’re not round. 2. You don’t have filling coming out of your head. 3. You don’t have a hole in the middle. 4. You don’t have frosting or sprinkles.” Arnie ultimately arrives at a stunning insight. “I’m starting to think you’re NOT a giant doughnut.” Mind blown, his pop eyes turning into big spirals in Keller’s high-calorie cartoons, the gooey gumshoe blurts out the obvious conclusion: “You’re a GIANT COOKIE!” Would that all newcomers, to school or elsewhere, whatever their differences, received the same warm collective welcome Arnie and his fellow baked goods thereupon offer in the luscious climactic spread. Readers of Arnie’s eponymous 2003 debut or his chapter-book outings in Bowling Alley Bandit (2013) and its sequels may be disoriented to find him back in the doughnut case and without human pal Mr. Bing or chip companion Peezo, but that doesn’t make the spirit of this offering any less sweet. (This book was reviewed digitally with 10-by-20-inch double-page spreads viewed at 56.3% of actual size.)

Donut expect this to pass young audiences without causing a sprinkle of giggles.