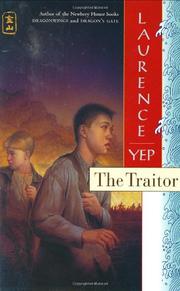 From the Golden Mountain Chronicles series

Yep lays down another course of his now monumental, seven-generation family chronicle begun in Dragonwings (1975) with this tale of two Wyoming Territory outsiders—one an illegitimate white child, the other a US-born son of a Chinese coal miner—who witness the Rock Springs massacre, one of the most savage race riots in our history.

In alternating chapters (and typefaces), Joseph Young, or “Precious Light” as his father insists on calling him, and Michael Purdy, the washerwoman’s son, track rising tensions between the town’s Chinese and non-Chinese residents, as they themselves forge a secret, uncertain alliance in a fossil-filled cave they dub Star Rock. As hostile confrontations and public rallies gradually escalate into an all-out, armed assault on the Chinese camp, Yep methodically exposes the ugliness of racial hatred, with characters on both sides justifying irrational stances fueled by fear, misdirected anger, malicious intentions, and misunderstanding. Star Rock isn’t the only sign that better relations are possible, however, for to his astonishment, Michael finds his previously intolerant mother sheltering Joseph and his father from the general slaughter until they can flee—and the tale ends with both families about to re-connect in San Francisco. “You have the right dream,” a wiser Joseph tells his father Otter (protagonist of Dragon’s Gate [1993], and here a reviled, steadfastly pacifistic adult). “There just have to be more of us making that dream happen.” Yep caps his strong, chilling story with a historical afterword, then maps out his saga’s past and future episodes.

Essential reading for all students of America’s complex history and culture.