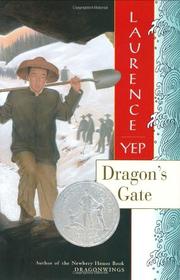 From the Golden Mountain Chronicles series

Yep illuminates the Chinese immigrant experience here and abroad in a follow-up to The Serpent's Children (1984) and Mountain Light (1985).

After accidentally killing one of the hated Manchu soldiers, Otter (14) flees Kwangtung for the "Golden Mountain"; he finds his adoptive father Squeaky and Uncle Foxfire in the Sierra Nevada, where thousands of "Guests" are laboriously carving a path for the railroad. Brutal cold, dangerous work, and a harsh overseer take their toll as Squeaky is blinded in a tunnel accident, Foxfire is lost in a storm, and other workers are frozen or half-starved. By the end, toughened in body and spirit, Otter resolves never to forget them or their sacrifices. Foxfire and Otter consider themselves only temporary residents here, preparing for the more important work of modernizing their own country while ridding it of Manchu, Europeans, and, especially, the scourge of opium. America is a dreamlike place; English dialogue is printed in italics as a tongue foreign to most of the characters; and though Otter befriends the overseer's troubled son, such social contact is discouraged on both sides. In a story enlivened with humor and heroism, Yep pays tribute to the immigrants who played such a vital role in our country's history.