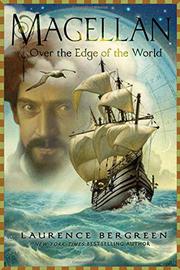 Over the Edge of the World

Bergreen ably adapts his book for adults Over the Edge of the World: Magellan’s Terrifying Circumnavigation of the Globe (2003) into a gripping and harrowing true adventure story for young readers.

Magellan is portrayed as a completely fearless, often reckless opportunist who had an uncanny ability to make powerful enemies and earn the enmity of his crew. Outsized ambitions led him to abandon his native Portugal for the chance to command an expedition for archrival Spain, which made him commander of the largest and best-equipped expedition of the time to find the fabled Spice Islands and claim the lands he found along the way for Spain and the Catholic Church. Surviving near-constant mutinies, treacherous sailing conditions, and frequent threats of starvation, Magellan brought his expedition as far as the Philippines, where he was killed in a confrontation with the inhabitants of Cebu. Though Magellan’s armada went on to the Spice Islands without him, further tragedies reduced the fleet of five ships and 260 sailors to a single battered vessel with 18 survivors that returned to Spain. Bergreen recounts in vivid and grisly detail the wretched conditions the crews of the ships had to endure, skillfully explaining the complicated geopolitics of the era and the historical import of the expedition.

An engrossing, dramatic account of courage and tragedy from the Age of Discovery.