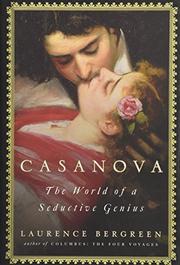 The World of a Seductive Genius

Bergreen (Columbus: The Four Voyages, 2011, etc.) applies his historical storytelling skills to the famous Venetian lover, introducing his intellectual side.

Giacomo Casanova (1725-1798) was the child of two actors from whom he inherited and perfected his playacting abilities, which he used to his advantage as a social climber. He trained for the church and received a doctorate in civil and canon law at age 16, giving him the basis for his exceptional writings. His mother deserted him and set the pattern for the Casanova Syndrome of seduction and abandonment. He was a libertine and proud of it; he felt it better to be notorious than obscure. He was an adventurer, mathematician, musician, and literary genius, but he was also an obsessive gambler, losing and gaining fortune after fortune. One of his most successful gambles was instituting the French lottery for the state in 1758. It continued to be successful even through the French Revolution, paying for the Ecole Militaire where Napoleon trained. (It was Napoleon who eventually caused the collapse of Casanova’s beloved Venice.) Casanova usually fell in love with his conquests, and sometimes he actually failed to convince his lover to submit to him. Condemned as an atheist by the Inquisition, he was locked up in a miserable prison on the top floor of the Doge’s Palace. It would be nearly two decades before he was pardoned and allowed to return to Venice. Throughout, Bergreen makes good use of an excellent translation of his subject’s 12-volume memoir. While it was published shortly after his death, it was censored and edited, and the first unexpurgated version didn’t appear until 1960. The author neatly captures Casanova’s voice, “often amused, but rarely mocking, conversational yet highly literary, and simultaneously vulgar and brilliant.”

Casanova’s adventures include plenty of juicy details, and Bergreen weaves in just enough to prove his reputation. His travels during one of history’s most exciting periods will be great fun for any history lover.