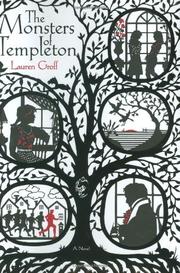 THE MONSTERS OF TEMPLETON

Cooperstown, N.Y., and its most famous native son provide first-time novelist Groff with much of the grist for this sprawling tale of a young woman searching for her father.

In The Pioneers, James Fenimore Cooper rechristened his (and Groff’s) hometown as Templeton; she not only adopts the name, but grafts her protagonist onto the family tree of a character from the novel, Judge Marmaduke Temple. Grad student Willie Upton slinks back into Templeton in the summer of 2002 just as the corpse of a mysterious, 50-foot creature surfaces in Lake Glimmerglass. She’s had a disastrous affair with a married professor and isn’t sure she can go back to Stanford, Willie tells her feisty single mother. Vi, who always claimed not to know which member of her San Francisco commune knocked her up in 1973, has a surprise of her own. In truth, Willie’s father lives in Templeton and doesn’t even know he has a daughter. Vi won’t tell Willie his name, but (implausibly) drops a big hint. Like Vi, Willie’s dad is descended from Judge Temple, who apparently scattered illegitimate children across the 18th-century landscape. As Willie hunts through old documents for clues to her parentage, the voices of generations of Templeton residents mingle with those of such archetypal Cooper creations as Natty Bumppo and Chingachgook in a narrative that winds through 250 years of American history. The secrets uncovered include murder, arson, poisonous intra-family rivalries and the exploitation of slaves and Native Americans. The leviathan pulled out of the lake seems less of a monster than some of Templeton’s respectable founders. Willie and other contemporary citizens are far nicer; readers will be pleased when the likable heroine meets her father, reconciles with Vi and forms a tentative new relationship with a decent guy. But there seem to be two novels here, and they don’t fit together terribly well.

Flawed, but commendably ambitious and stuffed with ideas—many of them not well developed, but inspiring hope for a more disciplined second effort from this talented newcomer.