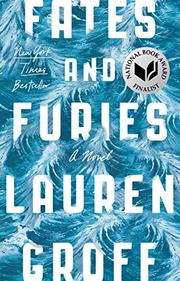 An absorbing story of a modern marriage framed in Greek mythology.

Groff’s sharply drawn portrait of a marriage begins on a cold Maine beach, with newlyweds “on their knees, now, though the sand was rough and hurt. It didn’t matter. They were reduced to mouths and hands.” This opener ushers in an ambitious, knowing novel besotted with sex—in a kaleidoscope of variety—much more abundant than the commune-dwellers got up to in Groff’s luminous Arcadia (2012). The story centers first on Lancelot “Lotto” Satterwhite, a dashing actor at Vassar, who marries his classmate, flounders, then becomes a famous playwright. Lotto’s name evokes the lottery—and the Fates, as his half of the book is titled. His wife, the imperial and striking Mathilde, takes over the second section, Furies, astir with grief and revenge. The plotting is exquisite, and the sentences hum; Groff writes with a pleasurable, bantering vividness. Her book is smart, albeit with an occasional vibrato of overkill. The author gives this novel a harder edge and darker glow than previous work, echoing Mathilde’s observation, “She was so tired of the old way of telling stories, all those too worn narrative paths, the familiar plot thickets, the fat social novels. She needed something messier, something sharper, something like a bomb going off.” Indeed it is.

An intricate plot, perfect title, and a harrowing look at the tie that binds.