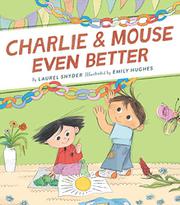 “Mom is the best!”—and her birthday is just around the corner.

In four short chapters, Charlie and Mouse repeatedly one-up themselves as they arrive at better and even better ideas. The early reader opens on a familiar scene in which Mom makes pancakes for the kids. Charlie and Mouse enthusiastically offer suggestions for improvements on the pancakes, until Mom’s expression turns from cheer to exasperation and her humor becomes blunt. In the following sagas, the siblings shop for gifts, prepare decorations while Dad burns the cake, and split up to distract Mom just long enough for a backup special surprise. The standout second chapter captures the comical banter as the children consider what gifts Mom would like with the money they have to spend. They mull over buying her a box they would promise never to peek in but, knowing that they “like to snoop,” reject the idea in favor of a more practical one. Though previous titles in this series have identified the children as male, they are not referred to by any gendered pronouns and nothing about their illustrated appearance codes them as overtly masculine or feminine. They do appear to be biracial, with a white mom and Asian dad.

An affectionate and quirky offering, spot-on for beginning independent readers.