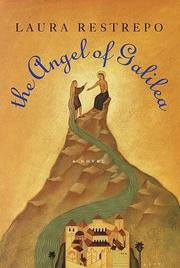 THE ANGEL OF GALILEA

This fulsome first novel from Colombia portrays the changed sensibility of a woman reporter who investigates rumors that an angel has shown up in a Bogot† barrio. Initially skeptical, “La Monita” (roughly, “blondie”) is gradually seduced by the simple faith of villagers insistent on the divinity of the handsome stranger (Orifiel) newly arrived among them—and, in a passage Jackie Collins may envy, by the “luminous” being h/Himself (“the angel made love to me with the instinct of an animal, the passion of a man, and the furor of a god”). Any possibility that Restrepo intends a satire on contemporary suggestibility is scuttled by rapturous italicized purple passages in which Orifiel “speaks” of his unearthly origin and earthly mission—though it remains (just barely) possible that he is, as some allege, merely an “autistic schizophrenic retard.” This transparent piffle, already an international success, arrives garlanded with praises from Isabel Allende and Gabriel Garc°a M†rquez—whose tongues, one assumes, must be very sore from being held so firmly in their cheeks.