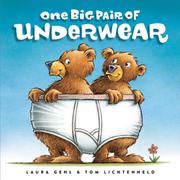 ONE BIG PAIR OF UNDERWEAR

Share and share alike! Gehl’s debut picture-book text is a silly romp of a counting book with a lesson in sharing to boot. Its rhyming text opens with a giggle-inspiring dilemma: “ONE big pair of underwear. / TWO brown bears who hate to share. ONE bear wears the underwear. // ONE bear growls, ‘That isn’t fair!’ ” Ensuing pages display similarly silly conundrums: only two snacks for three yaks, just five pillows and mats for six sleepy cats, and so on. The only thing that these creatures seem to share is a case of the greedies. For every situation, the one who comes up short is less-than-pleased, with the excluded cat, for example, thinking “Rats! Rats! Rats!” as it inflates an air mattress (which has a hole in it). Such comical twists abound in Lichtenheld’s illustrations, which more than hold their own against the text’s goofy details and seem like they would translate well into animation. Ultimately, a group of 20 pigs amicably share just 10 playground slides, and seeing this, the bears are inspired to share their underwear, as depicted in the cover art. The other animals follow suit, and all’s well that ends well—even if the text credits the underwear, rather than the (ironically) generous pigs, for inspiring the feel-good camaraderie at book’s end.

A picture book to count on for delightful shared reading.