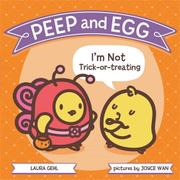 From the Peep and Egg series

Peep and Egg are back, and this time big sibling Peep is trying to convince Egg to go trick-or-treating.

The younger sib is having none of it. Peep tries to walk Egg through the stops they will make trick-or-treating, but each costume seen gives Egg the shivers, and the little yellow chick’s various poses and facial expressions eloquently speak of both stubbornness and fear: wings crossed, eyes wide with eyebrows raised, wings over the ears (do chicks have ears?), and eyes shut tight. But Peep doesn’t give up easily. The older chick tries jokes to loosen up Egg, but they are not enough to convince Egg to go trick-or-treating. But when Peep finally gives up and walks away, Egg is left in the dark, spooky eyes all around, and that’s enough to change Egg’s mind. Peep graciously welcomes Egg, and the two make the rounds together, as a butterfly and a caterpillar. Wan’s seemingly digital illustrations use bold black lines filled with color and only a few added details to keep the focus on the characters, who are pleasantly rounded and easily recognizable farm animals with simple line-and-oval facial features that show remarkable range of emotion. While Egg seems none the worse for it, it’s too bad Peep’s solution involved abandoning Egg.

Goes down easily for those youngsters who are similarly frightened, and Peep’s corny jokes should be added to every repertoire.