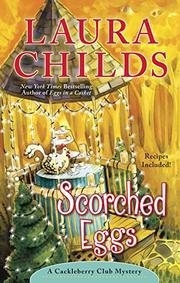 Three 40-something gal pals pool their resources to solve another local crime.

Suzanne, Toni and Petra own the Cackleberry Club, a popular restaurant in the Midwestern hamlet of Kindred, where down-home cooking meets locally sourced ingredients. While getting her hair done one afternoon, Suzanne smells smoke. Suddenly the building next door, which houses the County Services Bureau, explodes in flame, killing county agent Bruce Winthrop’s secretary, Hannah Venable. Having built a reputation by helping Sheriff Doogie solve several cases (Eggs in a Casket, 2014, etc.), Suzanne finds several people begging her to take up the case—first and foremost her friend Kit Kaslik, whose wedding to Ricky Wilcox is rudely interrupted when Doogie arrests the groom before he can say “I do.” Ricky insists the blasting caps in his car have been planted, and there are certainly plenty of other suspects, including Hannah’s cheating husband. Suzanne is busy getting her quarter horse ready for the barrel-racing competition at the fair, hosting a sold-out dinner theater at the cafe, cooking gourmet dinners for her doctor boyfriend and even playing momma to a baby owl that fell out of a tree behind the restaurant. But she’s not too busy to poke her nose where someone thinks it doesn’t belong. As a reward, she’s shot at while out riding, and her veterinarian’s office is nearly set afire while she’s visiting with her pooch. Even Doogie wants her to butt out. But she and her fearless friends refuse to give up until the killer is found.

The clutch of suspects and appended recipes aren’t quite enough to bring this up to the standard of Childs’ other series, especially the Tea Shop series (Steeped in Evil, 2014, etc.).