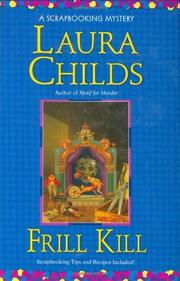 As New Orleans slowly recovers from Katrina, a series of Halloween bashes are planned, creating the perfect location for a bizarre murder.

Carmela Bertrand, enjoying life without the wealthy husband she’s separated from, has just left a huge party at Juju Voodoo, the French Quarter shop of her best friend Ava, when she discovers the body of Amber Lalique, a fashion model for local designer Chadron. Attacked by an unknown assailant, she awakens to find Ava’s newest hire, handsome fortune teller Giovanni, along with the EMS and the police, who take Giovanni in for questioning. Since Amber appears to have been killed by an animal, some strange fur left behind puts Giovanni’s brother Santino, whose circus act includes wolves, squarely in the picture. Even when the wolves prove innocent, Carmela’s pal, Detective Edgar Babcock, suspects but can’t prove that one of the brothers is involved. Meanwhile, Carmela has her hands full because the publicity is keeping her popular scrapbooking store filled to capacity while she’s busy designing for Halloween theme parties and decorating and modeling for Chadon’s big fashion show. Her curiosity gets both herself and Ava into some dangerous situations, and she barely escapes becoming the second victim of a fiendish killer.