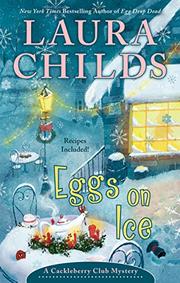 Hoping to bring back Christmas cheer, the Cackleberry Club takes on yet another murder case.

Suzanne, Toni, and Petra all contribute their varied talents to the Cackleberry Club, the Midwestern eatery they own together. At the first dress rehearsal of A Christmas Carol, a Kindred Players production at which Suzanne and Toni are helping backstage, Allan Sharp, the vastly unpopular lawyer who plays Scrooge, is murdered by a ghostly figure before the eyes of the cast and crew. The ghost, chased by Suzanne, threatens her with a knife before vanishing into the snowy night. Despite stern warnings from her fiance, Dr. Sam Hazelet, and Sheriff Roy Doogie, Suzanne can’t help getting involved when Amber Payson, who was sexually harassed by Sharp when she worked at his law firm, becomes the No. 1 suspect. Everyone from the mayor to Toni’s lowlife soon-to-be-ex husband, Junior, are also suspected, but Doogie seems to have his eyes set on Amber. In spite of their busy schedules, Suzanne and Toni go into sleuthing mode and step things up when someone burns down Junior’s trailer and soft-hearted Toni lets him sleep on her couch. The killer, meanwhile, has taken due note of Suzanne’s activities; if she doesn’t come up with some solid clues quickly, she may be the next to die.