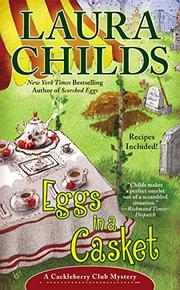 EGGS IN A CASKET

The murder of a man who was nobody’s friend brings the Cackleberry Club’s middle-aged amateur investigators back into investigation mode.

Though he was not particularly interesting during his life, prison warden Lester Drummond’s death is a subject of fascination for the small town of Kindred. Not least of the interested parties is the Cackleberry Club, the three 40-something owners of the best breakfast place in town. It’s not as if Suzanne, Toni or Petra know much about the man, though Suzanne and Toni are the ones to stumble on his body. The issue is really the evidence that their friend Missy is somehow wrapped up in Lester’s murder, down to the Taser gun found in her bedroom. Though some thought that the affection between the two was mutual, the truth is that Lester’s behavior toward Missy was borderline stalking. To clear Missy’s good name, Suzanne and Toni ask around town to find who had the most to gain by the tidy disposal of Lester’s body. Once the two start their snooping, they find that Missy isn’t the only one in town who’s been on Lester’s bad side; a few of the other potential killers had a lot more to lose. Sheriff Doogie, longtime ally of the triad, must have made progress in the case, since he's soon enough rendered incapacitated and uncommunicative in the hospital, presumably since he’s gotten too close to the killer. Now the Cackleberry Club has to discover what he knew.

The 40-plus female formula might work for longtime readers of Childs (Postcards From the Dead, 2012, etc.), but a lack of all but the most superficial character details will leave new readers wanting more.