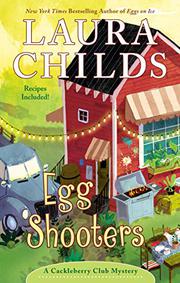 The three ladies of the Cackleberry Club cafe are involved in yet another Midwestern murder investigation.

Although Suzanne Dietz is happily engaged to Dr. Sam Hazelet, her obsessive curiosity plunges her into a dangerous murder investigation in which she’s aided and abetted once again by Toni, her flamboyant partner in daring escapades, and Petra, the more conservative chef. While bringing Sam’s dinner to the hospital, Suzanne walks into a robbery in progress. The security guard is dead, a nurse is attacked, and the receptionist is wounded by a masked, drug-stealing robber whom Suzanne alertly beans with a large thermos of hot chili before he vanishes into the night. Despite dire warnings, Sheriff Doogie has never really turned down Suzanne’s help, and she’s even more determined than usual to track down the killer she witnessed in action. To add to the excitement, there have also been a series of truck hijackings and the robbery of drugs from a pharmacy in a nearby town. Suzanne has plenty to keep her occupied with the success of the cafe, but a series of bad decisions in which she’s egged on by Toni lead to them sneaking around and prying into the lives and business dealings of a roster of suspects. Although Suzanne manages to clear several of them of wrongdoing, the ones who remain on her list may have added her to theirs.