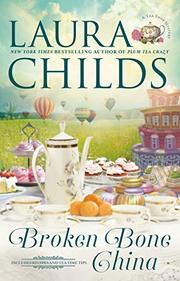 Hot air balloons and drones fail to play well together.

Theodosia Browning of the Indigo Tea Shop and her tea expert, Drayton Conneley, have catered a fancy tea for a balloon rally whose leading attraction is a balloon ride. Drayton, already white-knuckled, is horrified when a drone that appears among the balloons suddenly attacks one of them, causing it to crash and killing all the occupants. Soon Theodosia’s frenemy, Detective Burt Tidwell, arrives and questions them. The police think Don Kingsley, the CEO of local tech firm SyncSoft, was the primary target. Before he went down with the balloon, Kingsley had some money problems and a wife, Tawney, whose expenses rehabbing a classic Charleston house into a B&B were getting out of hand. Antiques dealer Tod Slawson tells Theodosia and Drayton that Kingsley was also the owner of an original Gadsden Flag, a Revolutionary War artifact that vanished from his home immediately after his death. A flag worth millions, an obvious motive for murder, brings Theodosia’s sleuthing instincts to the fore. She speaks with several dealers who’d been interested in buying the flag and with Tawney Kingsley, who’s gone directly from prospective divorcée to heiress. Theodosia’s boyfriend, Charleston police detective Pete Riley, is out of town, leaving her on her own except for Drayton and a few other friends. Taking time out from her responsibilities at the shop and all the special tea parties she’s staging, Theodosia agrees to help out a friend whose boyfriend, a whistleblower at SyncSoft, is in the frame. Her continued sleuthing soon makes her a target of a killer who will stop at nothing.

Has the year since Childs’ last tea-shop mystery (Plum Tea Crazy, 2018, etc.) whetted your appetite? Although the mystery is weak, the tea is strong, and the loving descriptions of Charleston, tea, and the accompanying food almost make up for it.