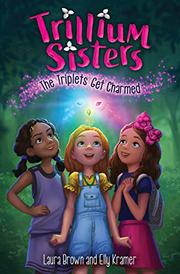 THE TRIPLETS GET CHARMED

From the Trillium Sisters series, volume 1

Eight-year-old triplets Emmy, Clare, and Giselle celebrate Founding Day—the day their veterinarian father, Dr. J.A., found them—instead of a birthday. Each girl has a baby animal pet (bear cub Claw, wolf pup Fluffy, and eaglet Soar), feels a special connection to trillium flowers for their three petals, and is indistinguishable from her sisters aside from occasional telling-not-showing characterization and illustrations that render Giselle as a girl of color while the rest of the family presents White. On their eighth Founding Day, their father, upset to see that the trillium patch where he first found his daughters has been uprooted, diverges from their traditions to replant the flowers and to reveal that there’s more to the original Founding Day story than he’s told them. Back then, a large trillium flower glowed before bursting into sparkles and leaving trillium petal charms behind that Dr. J.A. now gives to the girls. Later, when Emmy and their younger brother, Zee, go to pick strawberries, Zee falls into a river. The triplets work together to try to save him, but it isn’t enough until the charms activate, giving the girls superpowers and new outfits, and making their pets huge. Although the woodsy setting (especially their treehouse home) and animals charm, the blandness of both characters and plot falls short of magical. In the simultaneously releasing sequel, Bestie Day, freed from the burden of expository backstory, the plot (a White bully and her subservient, Asian-presenting best friend endanger bees by cutting too many wildflowers) gets moving faster but offers only marginal improvements.