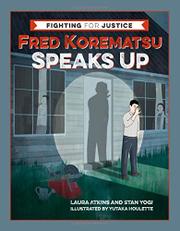 From the Fighting for Justice series

When Fred Korematsu, a young Japanese-American man, defied U.S. governmental orders by refusing to report to prison camps during World War II, he and his allies set in motion a landmark civil liberties case.

Like any American, Fred dreams of marriage and raising a family with his sweetheart, Ida, a daughter of Italian immigrants. But after the attack on Pearl Harbor, wartime hysteria spreads, and Japanese natives and Japanese-Americans on the West Coast are ordered to prison camps. Knowing this is unjust, Fred changes his name and calls himself "Spanish Hawaiian" but becomes dismayed knowing others are imprisoned in camps. His identity ultimately discovered, he is jailed following his arrest for his refusal to report to the camps and there meets Ernest Besig, a lawyer with the American Civil Liberties Union. Together, they begin a long and against-all-odds fight against injustice. Written in free verse, Fred’s story engages in powerful bursts and shows how speaking out brings complex consequences. Enhanced with pictures and archival materials, well-researched and approachable historical essays interspersed throughout Fred’s account offer context, while Houlette’s reverent illustrations give humanity to Fred’s plight. Co-authors Atkins and Yogi raise good questions (such as, “Have you ever been blamed for something just because of how you look?”) that will inspire a new generation of activists.

This first book in the Fighting for Justice series is a must-read for all civics classrooms.