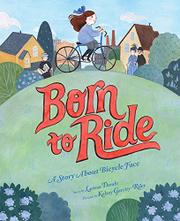 A Story About Bicycle Face

In this story set in 1896 Rochester, New York, a young girl determines to ride her brother’s new bicycle, going against societal mores.

Young Louisa Belinda is determined to ride her brother’s new bicycle despite inappropriate clothing (she solves that problem by changing her skirts for her brother’s pants) and fears of “bicycle face.” “Bicycle face,” Theule informs readers, was a caution put forth at the time to dissuade females from bicycling. It asserted that girls weren’t “strong enough to balance” and that their eyes would bulge and their jaw lock with the effort—“maybe FOREVER.” Oh dear. Louisa Belinda, however, is undeterred as she tries, falls, and tries again. Her perseverance is adroitly captured by Garrity-Riley’s naïve-style artwork. The illustrator also enhances the story by adding a visual parallel thread. Several illustrations show gatherings of adult women (both white, like Louisa Belinda and her family, and black) making posters for women’s suffrage. Meanwhile, Louisa Belinda succeeds in riding and discovers a very different bicycle face: one of joy. The story wraps up with Louisa Belinda’s suffragist mother sewing herself a pair of bloomers as the mother and daughter head off with their bicycles. Three pages of backmatter deliver more detail about the historical struggles of females for more freedoms, whether it be riding a bicycle or getting the vote.