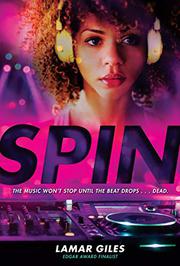 Two African American teens who dislike each other find themselves working together to solve the murder of a mutual friend.

Kya Caine and Fatima “Fuse” Fallon were both in the orbit of Paris Secord, aka DJ ParSec. Kya and Paris were friends from their neighborhood, while Fuse’s skill with social media made her the ideal person to promote this music among #ParSecNation fans. On the night Paris is murdered, both girls happen on the scene within minutes of each other; her death is a blow, and their shock and pain run deep. When they are briefly kidnapped by #DarkNation, a group of violent, extreme fans, they put their differences behind them to find the killer. The young women come from different worlds: Kya, the daughter of a hardworking single parent, resents upper-middle-class Fuse. But the drive to find answers before #DarkNation or the killer strike again propels them. They agree on the likely culprit and know their best chance of proving their guilt will occur during the high-energy commingling of everyone touched by the rising star and her music in an upcoming memorial concert. This is genre fiction at its best: a taut mystery with rich characterization and a strong sense of place. Social realities, such as class and family dynamics, add depth. The depiction of the grassroots music scene that feeds hip-hop and keeps it cutting edge is seamlessly woven into the narrative.

Not to be missed.