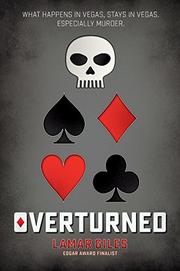 A fast-paced mystery uncovers a truth hidden by the bright lights of Las Vegas.

To bankroll her future escape from Las Vegas, Nikki plays illegal poker games, using her natural skill and training from her father, Nathan “The Broker” Tate. Those skills also help her run the family's failing casino, which languishes because her father is on death row for murdering his business associate. After five years, though, her father's conviction—like so many other black men, he's found to be wrongfully convicted—is overturned and he returns home. Nathan is determined to reveal who framed him, only to quickly end up dead. So Nikki takes up her father's quest and tries to untangle the mystery. Even her blossoming relationship with Davis Carlino—son of local magnate Bertram “Big Bert” Carlino—won't get in the way of finding the truth. Then Nikki discovers how Big Bert and her father are connected…and that Davis could be part of it, too. Is Nikki about to become another Vegas cautionary tale? Nikki is a totally appealing character: gutsy, practical, and strong, at the head of a cast of well-drawn supporting characters. The interracial romance between Nikki and Davis, who is white, is handled deftly, as is Giles’ skillful evocation of the townies-vs.-tourists nature of Las Vegas.