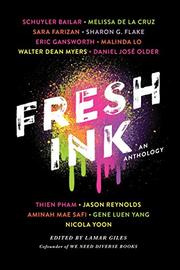 Thirteen leading YA voices from diverse backgrounds lend their talents to this anthology of 12 fictional short stories.

The collection represents the lives of people of color, immigrants, poor, and nonheteronormative individuals, drawing the reader into narratives that touch on universal themes of love and youth in its many iterations. Whether the reader dives into Eric Gansworth’s story of a youth from the rez grappling with racism and identity in high school, Malinda Lo’s tale of sexism and gender-flipping costumes at a science-fiction convention, or Melissa de la Cruz’s story of an undocumented Filipina student who wants “America to want me because I was already a part of the fabric of the country,” each contribution reminds us of the diverse individuals that make up the United States. Together they form a beautiful quilt of marginalized voices that include both bestselling authors, such as Jason Reynolds and Gene Luen Yang, as well as up-and-coming writers. The complexities of intersectional identities are also explored, for example in Sara Farizan’s story of a bisexual Iranian-American girl who introduces her girlfriend to her immigrant grandmother. United by vivid descriptions of food, language, and cultural norms, the collection will serve as both mirror and window to teens from all walks of life.

This beautiful, moving, and insightful collection is quintessentially American and a valuable addition to all middle and high school classrooms.