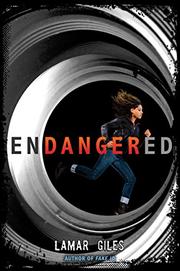 A teen vigilante finds the tables turned when a mysterious correspondent uncovers her secret identity.

During the day, Lauren Daniels, better known at school as Panda, tries to stay unnoticed. At night, she becomes Gray, a skilled and daring photographer who captures incriminating or humiliating pictures of high school bullies and posts them to her anonymous website. (Regrettably, the homophobic undertones of two of Gray's posts go largely unremarked upon.) Furious that popular Keachin Myer attacked a disabled classmate, Panda follows Keachin and hits photographic pay dirt. That night, she receives an email from someone called SecretAdm1r3r with incriminating photos of Panda herself photographing Keachin. From then on, the game’s afoot: SecretAdm1r3r's taunting messages at first dare Panda to take risky photographs but quickly move into more sinister territory. When SecretAdm1r3r hints that something will happen to Keachin and Keachin turns up dead the next day, Panda cuts ties, at her own cost. "We're all something we don't know we are," Panda tells readers, and though the mystery takes center stage, Panda also learns important truths about her own shortcomings. The cast is refreshingly racially diverse (Panda herself is mixed-race and looks it on the cover), and though some of the attempts at misdirecting sleuthing-inclined readers are more successful than others, frequent plot twists and short, fast-moving sentences keep tension high.