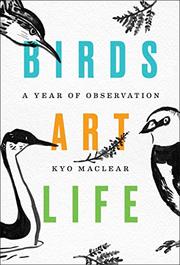 A Year of Observation

A meditation on freedom and confinement and the creative tension between the two.

Maclear (Julia Child, 2014, etc.) has written books for children and adults and some that blur the distinction with appeal for both, but she has never written a book quite like this. Also, few other books on birding are anything like this, for her “observation” is mainly restricted to urban Toronto, where the kinds of birds she sees aren’t likely to be exotic. What grabs and holds readers’ attention is the author’s own attention, as she describes in detail what she is seeing, how she is feeling, and how her perception and perspective are both shifting, however subtly. She began her unlikely bird year during “the winter I found myself with a broken part. I didn’t know what it was that was broken, only that whatever widget had previously kept me on plan, running fluidly along, no longer worked as it should….I had lost the beat.” Her father was ailing, her work was faltering, and, in what she calls her “roomy marriage,” she needed to explore something outside. “In my husband’s presence,” she writes, “I have felt my solitude dissolve, but I have also felt lonelier than the moon; such are the contradictions of intimacy.” The simple precision of Maclear’s prose belies the depth, as if the book were the tip of the iceberg and what she has elided or omitted constitutes the rest. She attached herself to a birding musician as a guide (her husband is also a musician; neither is named in the text), and it was through what she experienced with him that she discovered new ways of seeing and being. “The birds tell me not to worry, that the worries that sometimes overwhelm me are little in the grand scheme of things,” she discovered. By this point, she had outgrown the need for a guide.

Writers and others will find inspiration in the advice to stop and hear the birds.