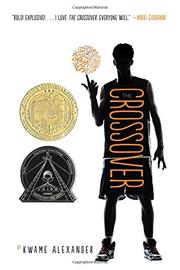 Basketball-playing twins find challenges to their relationship on and off the court as they cope with changes in their lives.

Josh Bell and his twin, Jordan, aka JB, are stars of their school basketball team. They are also successful students, since their educator mother will stand for nothing else. As the two middle schoolers move to a successful season, readers can see their differences despite the sibling connection. After all, Josh has dreadlocks and is quiet on court, and JB is bald and a trash talker. Their love of the sport comes from their father, who had also excelled in the game, though his championship was achieved overseas. Now, however, he does not have a job and seems to have health problems the parents do not fully divulge to the boys. The twins experience their first major rift when JB is attracted to a new girl in their school, and Josh finds himself without his brother. This novel in verse is rich in character and relationships. Most interesting is the family dynamic that informs so much of the narrative, which always reveals, never tells. While Josh relates the story, readers get a full picture of major and minor players. The basketball action provides energy and rhythm for a moving story.

Poet Alexander deftly reveals the power of the format to pack an emotional punch.