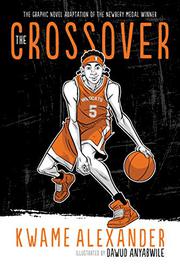 The tale follows a year in the life of the Bell family, with Chuck “Da Man” Bell at the helm as he teaches his twin sons, Josh and Jordan, how to follow in his star-studded footsteps. Josh “Filthy McNasty” Bell takes the lead in narration, providing readers with in-depth court play-by-play as he deals with the growing pains of adolescence, balancing brotherhood and his own becoming. Myriad poetic forms appear throughout. A portion embrace rhyme, with a hint of old-school flow recalling hip-hop’s golden era. Veteran comics illustrator Anyabwile brings an expansive range of black-boy emotional expressiveness to the page, accompanied by a striking attention to detail and pop-cultural reference. Just check the fresh barber lines on display or the true-to-life illustrations of beloved athletes and musicians such as LeBron James, Kevin Durant, Lil Wayne, 2 Chainz, and more. Eschewing the traditional paneled look of the graphic-novel form creates a dynamic flow between the scenes. These are sectioned out into basketball-appropriate quarters and dotted with Chuck’s inspirational Basketball Rules, such as this excerpt of No. 3: “The sky is your limit, sons. Always shoot for the sun and you will SHINE.” These messages grow ever more resonant as readers approach the climax of this heartwarming story.