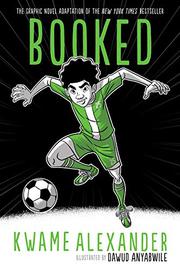 From the Crossover series

Eighth grader Nick Hall is a smart kid and a rising soccer star struggling with some rather sizable obstacles off the pitch in this graphic adaptation of Alexander’s 2016 verse novel by the same name.

Despite being quick on his feet and clever enough to dodge his schoolwork, Nick can’t as easily maneuver around his parents’ impending separation, sending his life into a bit of a spiral. Black-and-white illustrations with striking green accents from Anyabwile complement an emotional narrative about the forces kicking Nick while he’s already down. High expectations from his father, incessant bullying, and a sudden health scare that gets in the way of soccer aspirations pile on top of Nick during an already challenging stage of adolescence. But distance from his mother throughout all of this exacerbates a heartbreakingly relatable sinking feeling that necessitates professional intervention to help Nick work through his hurt. While the free-verse text may not always be an intuitive read for many traditional graphic-novel fans—especially when it comes to following dialogue—Alexander’s poetic storytelling and knack for language wrap around fun and expressive artwork to make for an inarguably charming format that may especially hold appeal for reluctant readers. Main characters are Black, and there is racial diversity in the supporting cast.