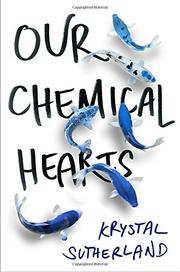 Henry Page has spent his high school years with his nose to the grindstone, avoiding romantic relationships and focusing on becoming the editor of the school paper. At the start of his senior year Henry is offered the job, but there’s a catch: transfer student Grace Town is offered the gig as well, making the two white teens co-editors. Sparks fly as Henry works with the aloof, unkempt new girl, who walks with a cane. As Henry and Grace grow closer, Henry falls deeper for her even as he learns just how broken she is. In her debut, Sutherland mixes her love story with equal parts hope and ominous dread. There is never any doubt that this couple is marching toward romantic oblivion, but it’s an effectively drawn journey. The characters speak with a John Green–esque voice, but they are never overbearingly precocious. Narrator Henry’s a smartly rendered character, a decent kid who has goals and works hard to achieve them. His new goal is Grace’s affection, and the unstoppable force meeting the immovable object that is Grace’s emotional unavailability provides the novel some of its sharpest moments. When the walls tumble down, the connection between the two is clearly an unhealthy one, and the author pulls no punches, devastating Henry, Grace, and readers in equal measure.

An emotionally engaging and draining debut.